Choosing the right antivirus program can sometimes be a herculean task. Between finding a program that actually works among the many out there, to figuring out the best plan for you, it gets tough.

A good antivirus program provides a solid, powerful protection against virus and malware attacks, it is not very intrusive, does not lower your computer’s performance and most importantly, comes at a reasonable price.

Does Bitdefender really worth your attention? Does it fulfil all the above named qualities of a good antivirus? I will examine Bitdefender’s performance, among other factors to determine whether Bitdefender is good.

How effective is Bitdefender Virus Protection?

Bitdefender is a good virus protection software. Not only is it a safe program, it is also one of the best antivirus software in the market at the moment. Users on Quora and Reddit attest to the fact that it is a great antivirus program with some really wonderful features.

I will examine recent independent lab results to corroborate the fact that Bitdefender is a good antivirus program. Furthermore, I will consider user reviews to show my judgment. 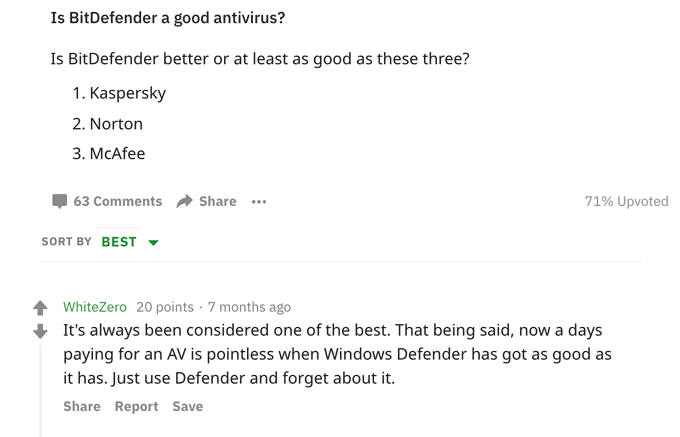 Bitdefender participates in a number of tests conducted by independent testing labs like AV-Test Institute and AV-Comparatives.

In the tests carried out by AV-Comparatives this year, Bitdefender rated Advanced+, the highest rating, for malware protection and performance respectively.

For tests carried out by AV-Test Institute in March-April 2019, Bitdefender was tested against a number of variables. It got perfect scores for protection, performance and usability, the core areas AV-Test conducts tests on. 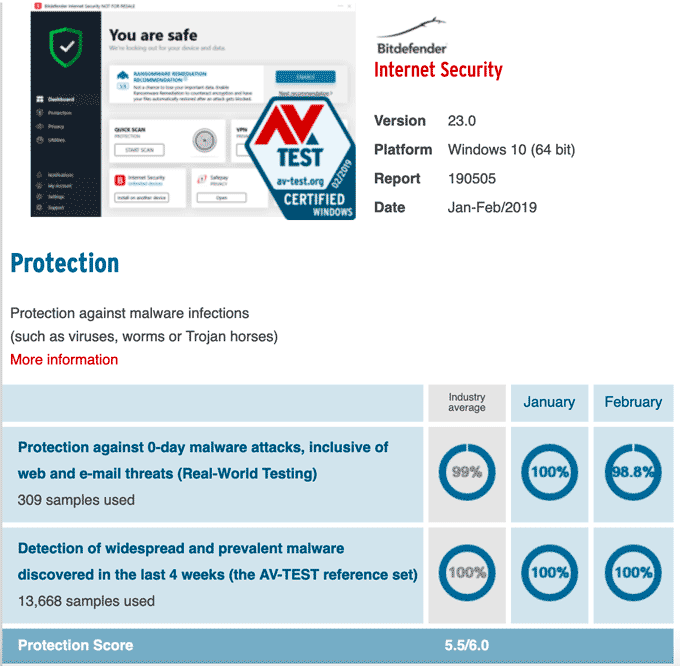 Does Bitdefender slow down Computer?

It should be expected that a computer program which uses a lot of resources, especially an antivirus program, would slow down the computer. In recent times, however, antivirus programs iterations have focused on programs with low impact performance.

Again, in the Endurance test by AV-Test Institute, Bitdefender was tested on how long it took to launch websites and download files from the internet.

For launching websites, Bitdefender achieved a low load level under 20 percent and therefore, sustain only 1 point. This is favorable as it means that Bitdefender did not affect the launch of a website.

Similarly, Bitdefender did not affect the time required to download files from the internet. Overall, it was noticed that Bitdefender does not slow down internet surfing speed.

There are tons of reasons to make Bitdefender your antivirus program. The first and perhaps most important is its silence. There are no intrusions with this program whatsoever. Silence and accuracy; the most sought qualities of an antivirus.

Bitdefender is an integrated antivirus with firewall and increased personal data protection. It comes with a powerful engine for scanning files. It scans your computer continuously for any suspicious threats on a list of threats updated almost daily.

It also scans external hard drives, USB drives and other devices connected to your PC. The AutoPilot feature is a blast as it does all the grunt work; all you need to do is set up a user profile. It also comes Bitdefender Photon, which ensures no computing power is wasted scanning applications and files constantly.

New features for the newer version include protection from phishing and webcam protection.

In addition, there’s the password manager, which works as an extension with Internet Explorer, Mozilla Firefox and Google Chrome. The Safepay hardened browser is also another feature. This creates HTTPS connections, blocks add-ons and screenshots and also has an on-screen keyboard.

Although there is no price too great to spend on security and protection, there are limits to what we can each spend. Furthermore, with so many players in the field, prices are competitive.

Bitdefender Total Security 2019, a flagship product earlier released in 2018, is a great product. It comes at a 68% off using discount coupon, costing only $26.99. However, if you want to include two interventions, install & Setup and Premium VPN, you may have to pay more. Regardless, this antivirus is a great choice.