If you are unsure which company to choose, then we are going to do a Malwarebytes Vs Bitdefender comparison for you. You will see a detailed analysis of the different product’s features in this article. I will also compare their prices. There will also be a report that will suggest which one offers better protection. 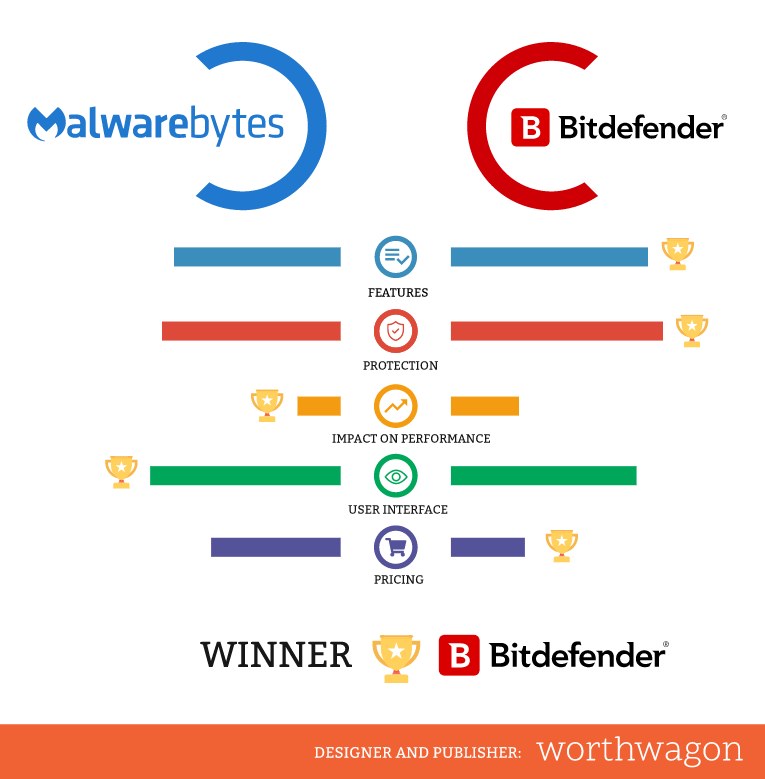 If you don’t have time to read this extended comparison, then I have the summary for you. You can read it and get an idea of both companies security suites.

Malwarebytes is advertised as standalone security program however, it is recommended to use it alongside some reputed antivirus suite. Bitdefender has all the essential components required which offers all-round security.

When it comes to the features, Malwarebytes have less. However, it cannot be said that its features aren’t enough to protect you. Malwarebytes focus on one thing, catching the malware. And it does that job perfectly. It doesn’t have those fancy features that you often see in other products. It comes with essential features required to do the job. It is probably the reason for not introducing several products.

Let’s check the features of the different product of Malwarebytes.

Malwarebytes Free only works on the Windows PC. However, you can also download the Malwarebytes for Mac free version. Features wise both are same. It is also available for iOS, Android, & Chromebook. When you download it first, it comes as a trial version and works full-featured till 14 days, and then it goes to free version mode.

The free version doesn’t give you protection. It doesn’t block the threats in the real-time. However, if you scan your PC, it will help you to remove the malware. It doesn’t protect your identity from hackers and doesn’t protect the document & files from Ransomware.

Malwarebytes Premium comes with all the features that Malwarebytes offers. It protects your different devices. It works on Windows, Mac, Android, iOS, and Chrome OS. The premium version helps you to clean your infected machine. It also provides real-time protection against modern computer threats.

It fewer hackers to steal your identity and privacy. The ransomware shield of Malwarebytes premium protects your document and financial files. It also protects you from malicious and fraudulent websites. Malwarebytes Premium also stops malware that degrades the performance or corrupts your programs.

Below is a table that will help you to understand the features of these products from Malwarebytes.

Bitdefender offers different security suites, and they all are packed with lots of features. The free version has least features. Also, the Antivirus Plus is the premium entry-level suite which has fewer features. Bitdefender suites don’t just protect you from malware; they provide overall protection on various levels. They come with Wi-Fi security analysis, VPN, Parental Controls, and Firewall. They also have a File Encryption feature to secure sensitive files.

Let’s take a look in detail of features in different Bitdefender products.

The free version of Bitdefender antivirus has only a few features. It protects your devices from viruses and malware. It also protects you from phishing and fraud websites though it lacks VPN, Parental Controls, Webcam Protection, and Ransomware Protection. It also doesn’t have password protection features. Of course, you will get limited features in the free version. Companies have to earn money to pay salaries.

Bitdefender Antivirus Plus works on Windows platform. It is the entry-level product in the premium service. It comes with Password Manager, File Shredder, Wi-Fi Security Advisor, and VPN. Antivirus Plus also scans the vulnerability holes and suggest fixes. There is also a feature that protects your financial transactions from phishing websites.

Despite having these features, it is not the best solution from Bitdefender. Antivirus Plus doesn’t have Firewall, Webcam Protection, Parental Controls, VPN, and File Encryption. It also doesn’t improve the performance of your device.

Bitdefender Internet Security is for people who want protection from several online dangers. It has all the features of Antivirus Plus. Plus it comes with Firewall, File Encryption, and Parental Controls. It also protects your webcam and files. Internet Security lacks Performance Booster and Anti-Theft feature.

The Total Security is the full-featured suite from Bitdefender. Also, it comes with multi-device support. With its subscription, you can shield 5 of your devices. It works on Windows, Mac, iOS, and Android. However, Windows version has all the features while other versions have according to their OS feature limitations.

To get a clear idea of which product has which feature, I have created a table for you.

After looking at the features of both companies suites, it is crystal clear that Bitdefender offers more features than Malwarebytes. So, Bitdefender is the Winner here.

Malwarebytes Vs Bitdefender – Which has better Protection?

Older anti-viruses use signature-based detection method. In this method, antivirus matches the file signature in their database. When its signature matches it blocks that file. The updation of signature in the database takes lots of time. Nowadays thousands of malware are emerging in every single day. So, this method is ineffective.

Now a new method is used to detect new malware also known as zero-day malware. This method analyzes the behavior of the programs, and when its actions matched the malware description, antivirus blocks it. So, antivirus uses the signature-based approach to detect known threats, and for unknown risks, they use behavior-based detection.

Malwarebytes and Bitdefender both security suites works on these two methods. They use the signature method to catch known malware and also analyzes behavior to detect the zero-day malware. Now, let’s consider the AV test institutes scores.

AV-Test Results of Malwarebytes and Bitdefender

According to AV-Test protection test in October 2018, Bitdefender’s performance was outstanding. Bitdefender got the score of 6/6, while Malwarebytes only got 4/6 score.

In the real-world test of zero-day malware, AV-Test used 311 samples of unknown threats. Malwarebytes blocks 97.2% malware in October month test. While in September month test, it prevents only 94.1% malware. This score is less than the industry average of 99.4%.

Not only this but Malwarebytes also not performs well in the signature-based detection. AV-Test used 21257 samples of widespread malware. In October and September month test, Malwarebytes blocked 99.6% threats while the industry average in this test is 100%.

In the same test, Bitdefender’s performance was up to the mark. In the real-world analysis of zero-day malware, Bitdefender blocked all the 311 samples in October and September month test.

It got similar scores in the signature-based test. Bitdefender blocks all the 21257 samples of widespread malware.

It is clear that regarding protection Bitdefender is a winner here.

AV-Comparatives Results of Malwarebytes and Bitdefender

AV-Comparatives conducted the most recent test in June 2018. Bitdefender’s performance was outstanding, while Malwarebytes was not part of the test. So we cannot compare their performance here.

In the Real-World Protection Test, AV-Comparatives used 1078 samples of zero-day malware. Bitdefender blocked 99.8% and compromised only 2 of them. Bitdefender blocks two legitimate files/websites in the false positive test. With this performance, Bitdefender got Advanced+ award.

The Malware Protection Test is for known malware which uses the signature-based detection method. In this Bitdefender again got the Advanced+ award. AV-Comparatives uses 11890 samples of widespread malware, Bitdefender blocked 99.99% threats and compromised only 1. In the false positive test, Bitdefender blocks nine legitimate websites/files.

Bitdefender Vs Malwarebytes – Impact on Performance

Any computer program that runs on your system consumes some of the resources. They need RAM, CPU, and Hard Disk to work. What if you install a program and it starts consuming all your available system resources? Your PC will not perform correctly and could also crash.

So we need to know which of these security suites takes fewer system resources. To understand this, I have to take the reference from these two AV test institutes again.

AV-Test for Performance of Malwarebytes and Bitdefender

In the AV-Test, Malwarebytes got 5/6 score, while Bitdefender got 6/6 score. Below is the result of Malwarebytes.

The AV-Comparatives did the performance test in October 2018. Bitdefender’s performance score was outstanding while Malwarebytes was not part of the test. So, we could not conclude here.

Bitdefender put 8.7 impact on the system performance and got the Advanced+ award.

Malwarebytes Vs Bitdefender – Impact on your Pocket

Malwarebytes’s cost for one device for one year is $47.19. I included the three device cost in the table to give you the clear comparison from Bitdefender’s cost. Regarding price, Malwarebytes is the winner here. However, if you compare the features, you get more in Bitdefender by paying more.

According to the users on forums, Malwarebytes is better than Bitdefender. Most user reports that Bitdefender is buggy and slows down the system a lot.

Below is a user that suggest to not go for Bitdefender.

Another user thinks that Bitdefender offers more than Malwarebytes.

Here another user tells that Bitdefender is heavier on our system resources than Malwarebytes, that’s opposite the test scores.

To know which Antimalware is popular, I will take the reference from OPSWAT report. It does the research and publishes the market share reports of top anti-malware.

According to its October 2018 Report, Malwarebytes has more significant market share than Bitdefender. Malwarebytes is on the second number in the top 10 list with 12.49% market share. While Bitdefender is at the fourth position with a 10.65% share.

So, according to user opinions and this market share report, Malwarebytes is a winner here.