Bitdefender and McAfee both have various security suites for home and corporate users. McAfee was founded in 1987, and then Intel purchased it in 2011. The Bitdefender started their journey in 2001. The aggressive pricing and extensive features make Bitdefender an excellent competitor to McAfee, despite starting so late.

In this article, I am going to make a Bitdefender Vs McAfee comparison. So, if you are not sure which company offers more features and protection, then this article will help you. I will also compare their pricing and impact on the performance. I will be examining their Antivirus Test scores to tell which one provides better protection. 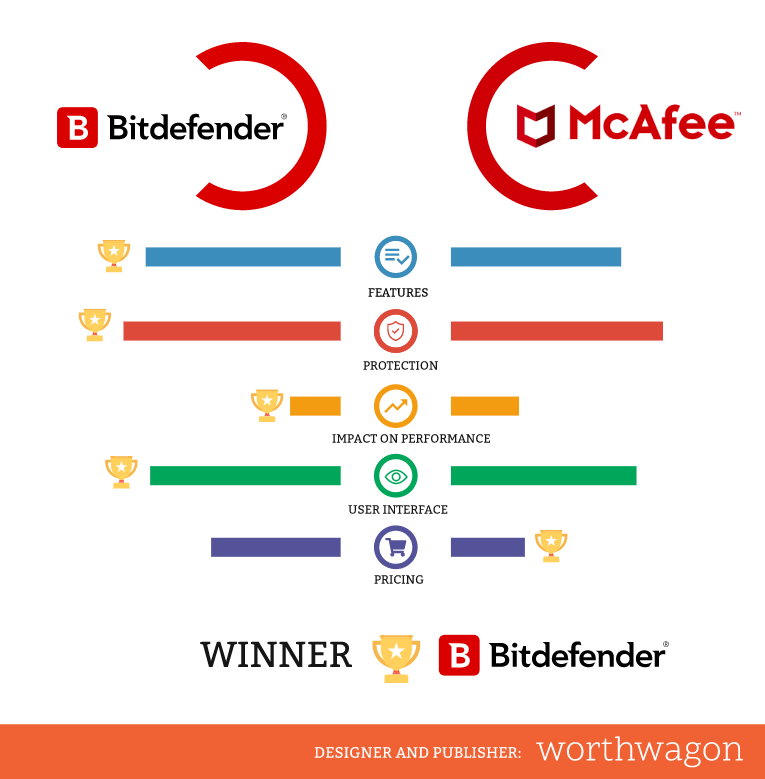 If you don’t have time to read this extended comparison, I have the summary for you. It will give you an exact idea which security suite to choose.

Bitdefender offers few extra features than McAfee. Also, according to test results, Bitdefender has better protection. It also puts less impact on the system performance. There were less false-positive cases with Bitdefender than McAfee.  The only plus point with McAfee is its pricing.  Bitdefender’s subscription cost is little higher than McAfee.

In short, Bitdefender has extra features and offers better protection than McAfee. It puts less impact on your system resources. However, you might pay a little more for it than McAfee.

Let’s take a look at features of different Bitdefender Products.

Bitdefender Antivirus Free Edition comes with the essential feature. It protects your computer from the virus and malware. The free version also has an anti-phishing layer that protects you from fraud websites. It doesn’t have premium features such as Password Manager, Parental Controls, Ransomware Protection, and Privacy Protection. It also doesn’t have VPN and Webcam Protection. A software company could not provide many features in the free version as they have to sell their paid versions.

When you look at the premium products of Bitdefender, Antivirus Plus is the entry-level product. It has all the features of the free version and also has free online support. Antivirus Plus comes with Vulnerability Scan, VPN, Password Manager, and File Shredder. It also accesses the security of your Wi-Fi and suggests the improvements. It protects your financial transactions from fraud websites.

Despite having such features, Bitdefender Antivirus Plus lacks a few. It doesn’t have Parental Control, Firewall, File Encryption, Webcam Protection, and Anti-Theft features. It also doesn’t improve the performance of your device.

Bitdefender Internet Security has the features of Antivirus Plus. It also has Parental Controls, Firewall, Webcam, and file protection. Internet Security is best for people who want to protect their devices from Internet Threats. It doesn’t have all the features. It lacks Anti-Theft and Performance Enhancement feature.

Bitdefender Antivirus for Mac offers protection against malware and viruses. It comes with a ransomware shield that protects your valuable data. It also prevents phishing and fraud websites stealing your credentials. Antivirus for Mac comes with VPN and Performance Booster feature.

The Bitdefender Total Security or the Family Pack includes Bitdefender Antivirus for Mac. So, there is no reason to purchase it separately.

Below is a table that lists all the different products and their features from Bitdefender.

McAfee doesn’t have that many products like Bitdefender. It used to have several products earlier, but now it only offers two products. Both products have all the essential features that require to protect a computer. It doesn’t have any free version either.

Let’s take a look at the features of different McAfee security suites.

The Total Protection from McAfee comes with all essential and advanced features. It comes with a Firewall, Password Manager, File Encryption, and File Shredder. It also has a Network Manager that checks the security of your Wi-Fi. Total Protection also comes with Parental Controls and Anti-Spam Filter. It protects phishing attacks and prevents other internet related dangers with the help of extension called Web Advisor.

If you purchase the Total Protection for one device, you will not get ID Theft Protection feature. Also, Safe Family feature is only available if you are buying it for ten devices. It runs on Windows, Mac, iOS, and Android devices.

McAfee LiveSafe comes with all the features that Total Protection offers. Along with all these features, it provides a 1GB of secure cloud storage. You can use it to store your valuable information and protect them from hackers and other cyber threats.

Below is a table that suggest the features of different products of McAfee.

Bitdefender Vs McAfee – Which has better Protection?

The security suite primary aim is to protect your PC from virus and malware attacks. The comparison will be incomplete if we don’t compare their protection capabilities. To know which software offers better protection, I will take reference from two antivirus test institutes. AV-Test and AV-Comparatives both institute analyses the protection capabilities of different anti-viruses and gives them score.

Earlier, anti-viruses used only signature-based detection method to catch the viruses. This method works adequately for threats that are widespread and known. Anti-viruses check the signature of the file in the database, and if it matches, the file is flagged as a virus. Now thousands of new malware emerging each day. The updation of new viruses in the database takes lots of time. So, in today’s scenario, only the signature-based method is not sufficient.

Along with Signature-based detection, anti-viruses started checking the behaviour of the programs to catch them. If a program takes actions like a malware or virus, anti-viruses blocks it. This method is useful in catching unknown threats that are also called zero-day malware.

So, now antivirus test institutes check the protection capability of antivirus in both methods. Bitdefender and McAfee both have adopted this new approach. Now let’s check their test result.

AV-Test Results of Bitdefender and McAfee

AV-Test conducted the most recent test in October 2018. In this test, Bitdefender and McAfee both perform well. Bitdefender got 6/6 score while McAfee got 5.5/6 score.

AV-Test used 311 samples of zero-day malware, and Bitdefender blocked them all in the September and October month test. It got 100% result while the industry average was 99.4%. In the signature-based analysis, AV-Test used 21257 samples of widespread malware. Bitdefender again blocks all those threats and got a 100% score.

In the same test, McAfee got 99.4% score in the September month test, and 98.6% score in October month test. While in the signature-based analysis, McAfee performed well and got 100% score.

Bitdefender and McAfee both perform well in the AV-Test results. However, McAfee’s performance was slightly lower than Bitdefender. So, Bitdefender is the winner here.

AV-Comparatives Results of Bitdefender and McAfee

AV-Comparatives did the protection test in the June 2018. In this test, Bitdefender and McAfee’s performance was near perfect.

In the Real-World Test, AV-Comparatives uses different zero-day malware samples and tests them with the anti-viruses. In this test, both Bitdefender and McAfee got the Advanced+ award which is highest. There were 1078 samples of unknown threats, Bitdefender compromised only 2 and got 99.8% score. In the false-positive test, Bitdefender blocks two legitimate websites/files.

AV-Comparatives test the signature-based detection with Malware Protection Test. In this test, 11890 samples of widespread malware were used. Bitdefender compromised only one and got 99.99% score. In the false positive test, Bitdefender produces 9 false alarm.

While McAfee blocked all those samples and got a 100% score. However, in the false positive test McAfee’s performance was deficient. It produces 35 false alarms.

So, we can say that in the AV-Comparatives results Bitdefender is one step ahead of McAfee.

Bitdefender Vs McAfee – Impact on Performance

To know which security suite puts less impact on the system performance, I will again take the reference from those two antivirus test institute.

AV-Test for Performance of Bitdefender and McAfee

AV-Test runs several diagnostics with antivirus installed. It checks the impact on performance by performing several actions. It reviews the impact on activities like downloading apps, launching apps, installing apps, copying files, and opening popular websites. Then it compares the scores with other anti-viruses and gives them scores.

In the performance test, Bitdefender and McAfee both got 6/6 score. Below is the test result of Bitdefender.

McAfee and Bitdefender both are properly optimised security suites and puts less impact on the system resources. However, Bitdefender is slightly better than McAfee.

Latest Performance Test of AV-Comparatives was in October 2018. Below is the result of impact score of popular anti-viruses. Less impact score is good.

This test result suggests the opposite of AV-Test performance results. Bitdefender got 8.7 impact score while McAfee got 6.4 impact score. AV-Comparatives result indicates that the McAfee security suite put less impact on the system performance.

However, they both managed to get the Advanced+ award which is highest. AV-Comparatives suggest that we should consider products equal with the same award. So, in this test, no one is a winner.

McAfee Vs Bitdefender – Impact on your Pocket

In the table, I included the prices of similar devices that will help you to analyse which puts less impact on your pocket. The McAfee Total Protection costs for ten devices for 1st year is $39.99, and for one device it is $54.99.

After looking at the tables, it is clear that McAfee prices are lower than Bitdefender. So, McAfee is a winner here.

If we look at the user opinions on various forums, there are mixed reviews of both. Some users think Bitdefender is better and some prefer McAfee.

Below is a user that suggest Bitdefender has better features.

On an online forum, users voted McAfee more than Bitdefender.

There are mixed opinions of users so we cannot decide a winner here.

It was tough to decide which one is better. Both Bitdefender and McAfee offer excellent security suites. However, if we look at the features, then Bitdefender has more. Protection and performance test results suggest that Bitdefender is slightly better than McAfee. When it comes to the subscription cost, McAfee has better pricing than Bitdefender. However, if a user is getting extra features and better protection, then they should not hesitate to pay a little more.